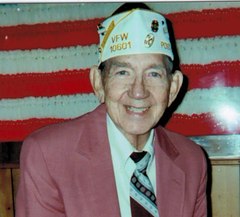 Mr. Prothman was born August 14, 1930 in Brunswick Georgia, and  on October 5, 2014 he entered the gates of heaven. Now he is with his Lord forever more.  He had made the Augusta, GA/Aiken, SC his home for the past 61 years. He was the husband of 54 years to the late Mrs.  Dorothy Patricia  Ann (Pat) Cardwell Prothman, and son of the late William (Bill)  Mitchell Prothman and the late Hazel Lord Prothman.

Mr. Prothman was born August 14, 1930 and attended the local Glynn  County Georgia Schools, and graduated from Glynn Academy in 1949. He was a member of the Georgia National Guard and was a veteran of the Korean Conflict having served in the  United States Army Chemical Corp. Mr. Prothman along with  his family have owned and  operated State Pest Control locally for the past 50 plus years (Which will continue to be operated by the family).  Mr. Prothman was a member of the South Carolina Pest Control Association, the National Pest Control Association. He was a past member of the Aiken Board of Realtors having been associated with Doug Treadway Co., Ed Becker and Associates, Mixon and Associates.  Mr. Prothman was very active in the Veterans of Foreign Wars having been a member since 1962. He was  first a member of Aiken VFW Post # 5877 , a founder of  the Clearwater  VFW Post # 9164 in 1979 and was Commander for 2 years, and founder of the Greater Aiken VFW  Post 10601 in 1981 and was Commander for 5 years and during his long association with the VFW he was a former All-State Post Commander and awarded the national Aide-De-Camp  citation for Founding The Clearwater and Greater Aiken  VFW Post.   Mr. Prothman is a charter member of the Korean Veterans Association and a member of the American Legion. Mr. Prothman loved his Lord and studied his word daily with Pastor Arnold Murray at Shepherd’s Chapel.

To order memorial trees or send flowers to the family in memory of William Harold Prothman, please visit our flower store.