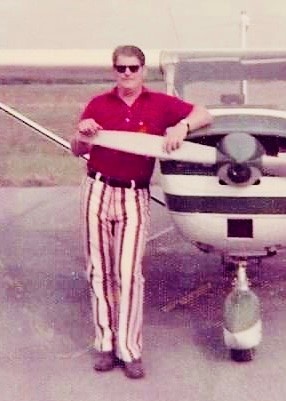 When other people saw a piece of junk, Bobby Pennington saw possibility. When others heard an airplane overhead, Bobby listened to the sound of adventure. When most people thought something was too hard, Bobby knew there was a way.

Building something out of nearly nothing, finding a way to make it fun, and having an aerial view of life were the hallmarks of a man who spent his life making the most of it, even when it didn’t look like much.

Mr. Pennington was born November 2, 1942, in Augusta, Georgia, son of Joseph Daniel Pennington and Doris Evans Pennington Gould. He grew up around Jefferson County, Georgia, and in “The Valley” near Aiken, South Carolina, where he met the love of his life, Naomi Osbon, in 1960. The couple married on Christmas Eve in 1961 and were together until his death, spending more than 60 years building a family and a legacy of unconventional living.

Mr. Pennington worked at a textile mill while a senior in high school, skipping his graduation to work the evening shift at the garment company. He put that high school education to work as a life insurance salesman (that didn’t go so great), punching a clock at a few manufacturing plants (also not the best fit), and as an entrepreneur, where he never lacked ideas but often missed the timing.

His first business venture was a convenience store in Keysville, Georgia, where nothing is convenient. That should have worked!

Mr. Pennington also dug in the dirt in a backhoe business, putting in septic tanks and digging holes and trenches for whoever and whatever whenever. He often said people stopped you-know-what-ing when he was in the septic tank business.

He also raised worms and crickets in a backyard bait business and owned his own rig as a commercial truck driver.

His true and enduring passion was aviation. He earned his private pilot’s license in 1971, infamously landing a small plane in front of his home on Noah’s Station Road in Matthews while his wife stopped traffic around the bend. He taxied it into the driveway, stopping to cut down Naomi’s favorite tree so that he could park it under a rickety tin shed behind the house. There he took it apart, piece by piece, down to the frame. Then he rebuilt it. All of it. From the engine to the fabric fuselage, he put it back together and flew it out of there the same way he came in.

Later, Mr. Pennington garnered an airframe and power plant mechanic’s license, which means the FAA officially certified him to do what he’d already done in his backyard. Eventually, he earned a commercial aviation license and became a crop duster.

While on a crop-dusting deployment in 1980, Bobby crashed a private plane near Miami, Florida. Miraculously, he survived the accident, but injuries sustained in the crash plagued him for the rest of his life. However, he walked again when they said he wouldn’t, and within months of the incident started a short-lived crop-dusting venture based in Wrens, Georgia.

While he was active in aviation, Mr. Pennington enjoyed giving many people a 5,000-foot view of their hometown along with the idea that the world might be a bigger place than they thought.

Mr. Pennington could build or fix almost anything. He’d haul something back from a trip to Ballards Junk Yard and pretty soon be driving a dune buggy, trike, or some other legendary homemade vehicle around the neighborhood. Family members wonder what he may have done if YouTube had been around back in the day.

A favorite project was turning an old school bus into a camper that the family enjoyed for years. This set him on the path to one of his unrealized goals in life – to live in a bus under the Brier Creek bridge in Keysville.

Mr. Pennington loved making people smile and “stirring it up” a bit. Other favorite pastimes included camping and boating at Clarks Hill Lake. He also loved everyone’s all-time favorite dog, Rudy Lee Tailspin, and most of all, Naomi.

If you spent more than five minutes with him, you’d know the thing he was most proud of was his family. His children and grandchildren took the anything’s possible ball and ran with it. The Pennington brood includes military veterans, aviators, scientists, culinary and visual artists, distribution and transportation professionals, entrepreneurs, writers, a professor of nursing, and a lawyer, thank goodness, because innovators need an attorney on speed dial.

A cousin who was one of the “kids,” Charlie Eason (Harriet), and many other cousins, nieces, and nephews.

The family plans to celebrate his life in the spring with a memorial picnic at Clarks Hill Lake.