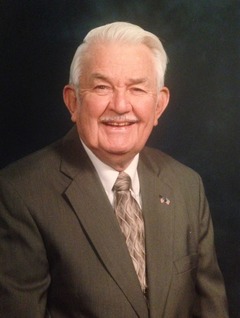 Bro. Herndon entered into rest Monday, February 23, 2015 at Pruitt Health- Aiken (Mattie C. Hall Nursing Home) after a war with illness.  He was born on June 5, 1930 to the late Mr. Earnest Herndon and the late Mrs. Ruth McDowell Herndon in Heard County GA. He was one of 11 children. Bro. Herndon became a Christian at the Antioch Christian Church in Heard County, GA when he was a young teenager.  He preached his first sermon on December 25, 1949 and later attended Atlanta Christian College (now Point University) in East Point, GA, graduating in 1952.  He was an active minister/evangelist for 65 years starting new Christian churches and ministering in Georgia, Mississippi, Alabama, Tennessee, Oklahoma, West Virginia, and South Carolina.  He made three evangelist missionary trips to India, and Russia with White Fields Overseas Evangelism. His Last ministry and eldership was with the Christ’s Way Christian Church in Aiken, SC.

In Lieu of flowers the family requests that contributions in his memory be made to Christ’s Way Christian Church, Attn: Bro. Mike Terry, 183 Old Wagener Road, Aiken, SC 29801. These Contributions will be forwarded to White Fields Overseas Evangelism, of Joplin, Missouri.

To order memorial trees or send flowers to the family in memory of Lindsey Earl Herndon, please visit our flower store.