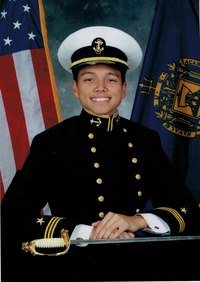 Aiken—ENS John U.  Kalsbeek age 23 passed away Sunday, October 27, 2013 in San Diego, Ca.  He was the loving husband of 2nd LT Amie (Nardini) Kalsbeek and son of Mr. Paul Kalsbeek and Mrs. Julita Kalsbeek of Aiken.

John was born July 13, 1990 in Richmond, VA.   He was a 2008 Graduate of Aiken High School, where he served as the NJROTC Commander and earned acceptance into the U.S. Naval Academy.  During his time at the Naval Academy, John competed across the country running with the Naval Academy Marathon Team.  In May of 2012, he graduated with a Bachelors degree in Ocean Engineering and was commissioned into the U.S. Navy as a Surface Warfare Officer.  John served as the Gunnery Officer on board the USS MILIUS (DDG-69),  homeported in San Diego, CA during its independent BMD deployment through the Fifth and Seventh Fleet Areas  of Operation.  Upon returning from the deployment, John traveled to Anchorage, AK to marry his fiancé and Naval Academy Marathon teammate, 2dLt Amie (Nardini) Kalsbeek stationed with the Air Force at Joint Base Elmendorf-Richardson.  John and Amie were married on Oct. 5, 2012 and continued to share their love for service, family and running together until his untimely passing.

He is survived and will be dearly missed by his wife, Amie; father, Paul; mother, Julita; brother, Abe; brother-in-laws, Ryan and Bradley; many family and friends.

Online condolences will be accepted in John’s honor to support the Tragedy Assistance Program for the Survivors (TAPS) at http://www.tapsrunandremember.org/2013/teamjohn.

To order memorial trees or send flowers to the family in memory of John Untalan Kalsbeek, please visit our flower store.